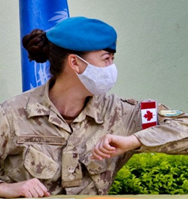 LCol JAIME PHILLIPS - "CALIBRE FOR COMMAND: LEADERSHIP FROM CANADA TO KANDAHAR AND BEYOND."

LCol Jaime Phillips was born in Fredericton, New Brunswick. She holds various educational achievements such as: Graduation from the Royal Canadian College of Canada (RMC), Bachelor of Arts in Military and Strategic Studies with a minor in Military Psychology and Leadership as well as a Master of Arts in War Studies from the Royal Military College of Canada. Continuing to pursue her education, she achieved a Master of Science in International Relations from Troy University and is currently pursuing a Doctoral program through RMC’s PhD War Studies program. She is also a graduate of the Field Instructor-in-Gunnery Course, the US Army Command and the General Staff College’s satellite course in Fort Benning, Georgia and the Combat Team Commander Course. To top it off, she speaks English, Spanish and French fluently.

The move to allow women into combat roles within the military began in 1971 but was still a controversial topic, especially in lead roles. Currently, women have been fully integrated into Canada’s military but are still in the vast minority. This is one of the aspects that makes LCol Phillip’s achievements exceptionally impressive.

LCol Phillips was 24 when she went to Afghanistan in 2007 where she became the first female Artillery Troop Commander in Kandahar as part of Task Force 1-07 of the International Security Assistance Force (ISAF).

LCol Phillips has served with the 2nd regiment, Royal Canadian Horse Artillery and the Royal Regiment of Canadian Artillery School. She completed a number of tours of duty under the titles Troop Commander, Adjuvant and Battery Commander. Her staff assignments include Staff Officer to the Combat Training Centre Commander in 2005, Instructor at the RCAS from 2011-2013, Senior Instructor at the Western Hemisphere Institute for Security Cooperation (WHINSEC) in Fort Benning, USA from 2016-2018, and Staff Officer to the Commander of the Canadian Army 2019-2020. She deployed domestically to support the G-8 Summit in 2010 and on October. 23rd, 2015 she achieved the Member of Military Merit (M.M.M) Award.

LCol Phillips continues to aid in breaking the notion that women cannot succeed in roles traditionally set for men. She is currently on her first deployment with the United Nations, working at the Canadian Army Headquarters in Ottawa and speaks on her experiences and insights regarding Afghanistan, women in the military and remembrance.

Future speakers for the 2020-2021 season are listed below. Information on how to join these luncehons will be shared closer to the event's date.

You can view previous events at this link.